7arkashat the Campaign: because “7arkashat” the act is a form of harassment!

Because “7arkashat” the act is a form of harassment!
The term “7arkashat” tentatively translates into “acts of teasing that have sexual connotations”.

The term “Taharosh” in Arabic (“Harassment” in English) does not have the same connotations in both languages. Harassment in the English language encompasses a wide spectrum of acts that are not necessarily sexual in nature. However, “Taharosh” in the Arabic Language has sexual connotations to the degree that “Taharosh” (harassment) and “Taharosh jinsi” (sexual harassment) are used interchangeably to mean the same thing.  Standing against this understanding of the term in the Arabic Language, 7arkashat pushes for a wider conceptualization of harassment in Jordan , away from pictures of sexual abuse and rape. The campaign looks forward to the day that verbal harassment and teasing on the streets will be not taken lightly or dismissed as unimportant, but frowned upon the same way Jordanians now frown upon “Taharosh”. This is the rationale behind the name of the Campaign “7arkashat”. We have chosen this name to convey that even the 7arkashat in the streets or over the internet, jokes and remarks of sexual nature in the office, harassment of children or Disabled people, even with a stare or a sleazy touch, should be understood and treated as “Taharosh”.

On the short run, 7arkashat aims at raising awareness about all types of harassment against everyone as a violation of a spectrum of Human Rights including one’s dignity and privacy.

Speak up: The harasser is safe as long as you are silent.

7arkashat will attain its goals using activities and campaigning tactics both offline and online. Offline, 7arkashat volunteers will be trained on producing creative messages to raise awareness and change perceptions. These messages will be disseminated in various ways in universities, youth communities and circles, and on the online platforms of the Campaign. The online campaign, other than making use of these messages on Social Media platforms, utilizes a website that crowd-sources incidents of harassment into a ‘heat-map’. Individuals reporting incidents of harassment will use a special number to log cases and add as many descriptors as possible for that particular case (description of the harasser, harassed, time of incident, etc). On the online map, users will be able to see all the incidents that took place in a particular street or city.

Why an interactive map?
We see this tool both as a preventive measure as well as a pressure mechanism. The map can help identify safe spaces and places that are harassment-free and will point to places that are particularly unsafe. Another purpose for this reporting tool is to identify harassment trends and gather scarce data and numbers on harassment incidents in Jordan. Numbers speak loudly and Jordan lacks these numbers when it comes to various types of harassment. If serious advocacy is to take root in Jordan, information and data need to be both crowdsourced from and freely accessible to the public. This website is a step in this direction as it helps advocate for changes in policies and practices to combat harassment in all its forms.
Mobilize: harassment will not be criminalized until you speak up!

On the long run, 7arkashat adopts an advocacy approach in pushing for all kinds of harassment to be criminalized with special mentions in the Jordanian Penal Code and not as it is treated now; under charges of ‘committing a scandalous act’ and ‘rape and violation of honor’. In its procedures, the Jordanian Legal System does not cater for, or punish, all types of harassment. Each case of harassment (even if verbal on the streets for example) is dealt with, in regard of procedures, as if it is an incident of sexual abuse or rape. Moreover, if the incident was not conveyed in a way that fits the description of the charges mentioned above (the only charges mentioned in the law), the harasser eventually walks free. This deters targeted people from reporting on various types of harassment and adds to the bizarre situation where nearly all youth talk about being recipients of 7arkashat and various types of harassment in their universities, workplaces, and on the streets, while no one is doing anything about it. 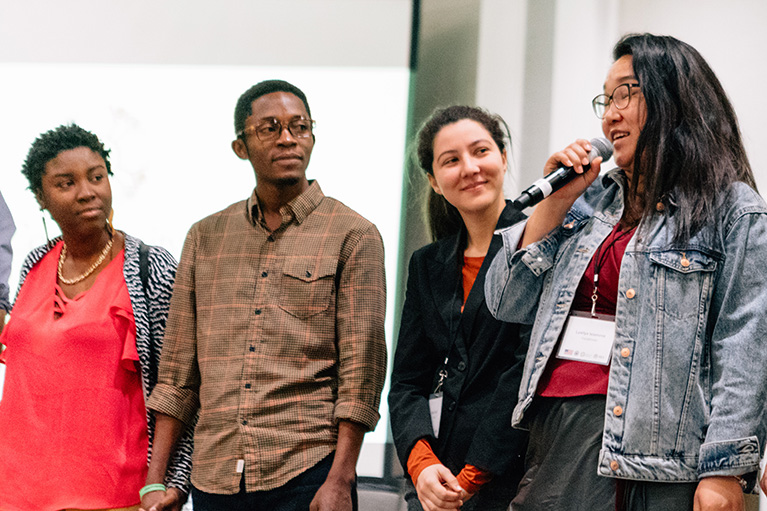